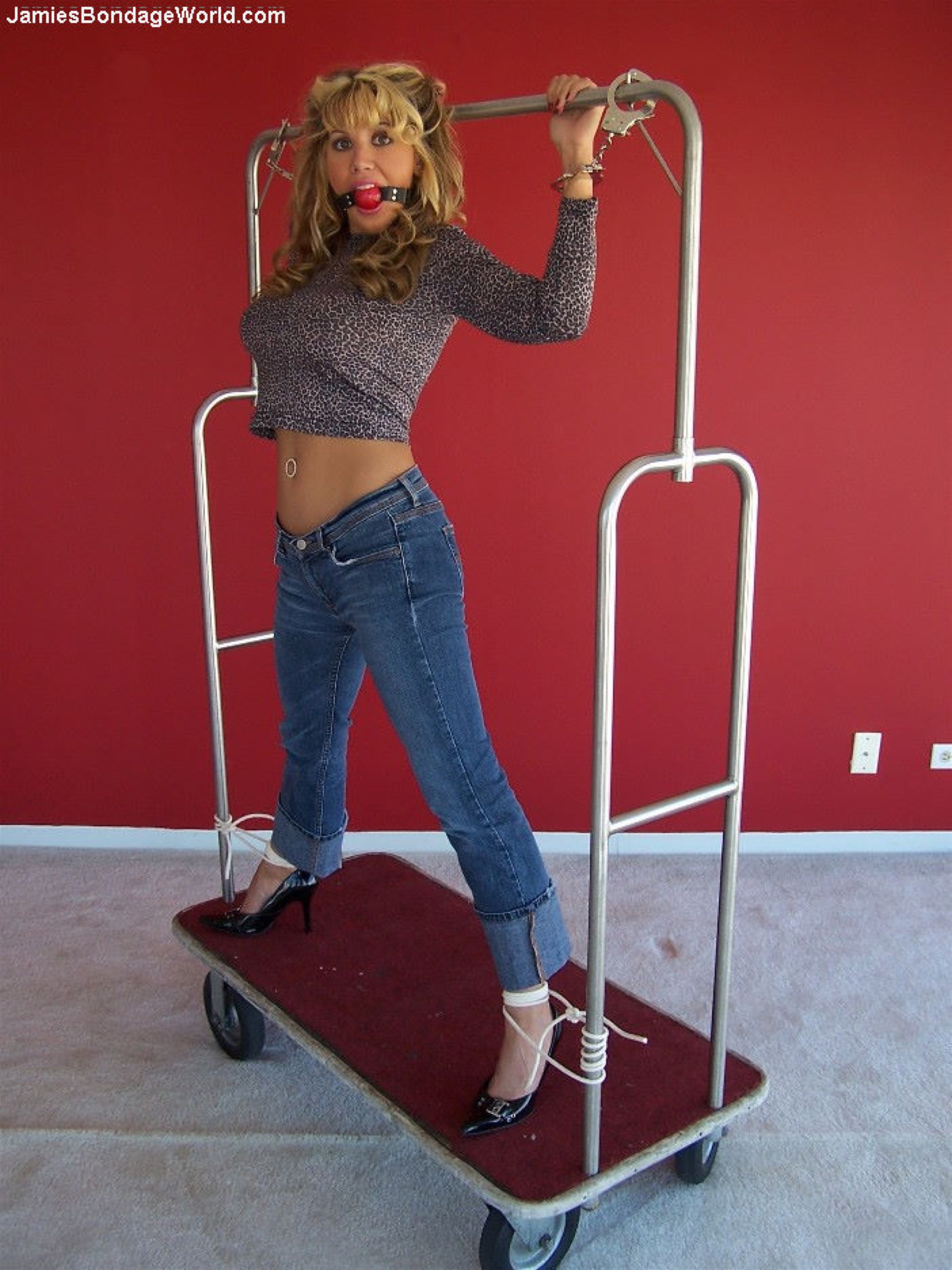 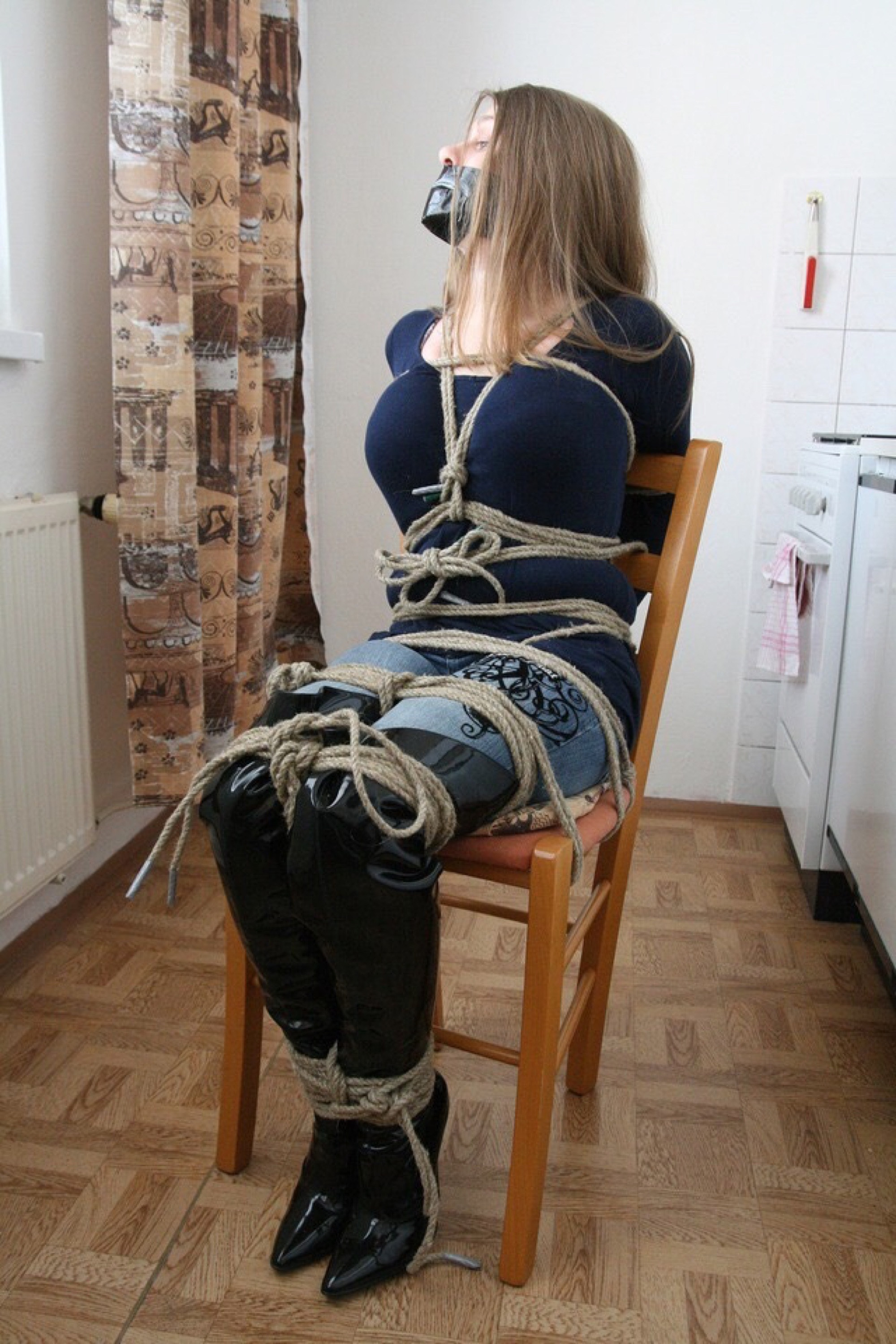 Agent Katie peers out the window to see what the hell happened to her backup…she could hear them in her earpiece discussing what to order in for lunch.

Agent Katie’s three captors kept her in the hotel room for hours trying to determine how much she knew of their operation.

Earlier today Agent Katie was captured by the mysterious Fetish Fashionista. If she could see, Agent Katie would surely be impressed with how the sinister woman coordinated her gag and blindfold with her outfit.

Bound on the bed, Kelly can only hear one side of the phone conversation.

Fortunately the Agents of S.P.A.N.K were listening in on the call because it was a sting operation. Agents Katie and Natalie wanted to rush to the room instantly to free Agent Kelly, but knew if they waited they could take down the buyer and seller at once!

When Agent/Instructor Swallow needed a demonstration subject for her escapology class, she called upon her bright protege, Senior Cadet Katie.

Katie was honored to help her mentor, and soon she was wriggling and writhing in front of the class, attempting to get free from Agent Swallow’s ropes.

Agent Swallow would later remark to her peers that her students had rarely been so attentive and engaged in a lesson.

And just like that, the bait was taken, and another of Agent Katie’s dangerous missions was underway.

She began to regain consciousness hours later with a splitting headache, cuffs and shackles on her wrists and ankles, and no recollection of the previous night.

She was about to find out precisely what happened to the missing girl. Being taken was part of her plan, but after being unconscious for so long, she could only hope that her backup team still knew where she was.

Agent Katie followed her quarry deep into the northern woods to find his isolated cabin.
She wasn’t nearly as stealthy as she thought she was, though, and he was an experienced woodsman.
He was also quite handy with a length of rope.

The midterm exam for the academy’s Escape and Evasion 101 class consists of a surprise simulation.

Cadets are summoned to a campus location in pairs, and accosted by upperclass cadets.  If they can evade capture, it’s an automatic ‘A.’  If they are captured, they can still get a passing grade if they can escape; their grade goes down a full letter grade for each half-hour they are prisoners.

Cadet Katie made the mistake of trying to stick together with her partner Jenny instead of looking out for herself—putting teamwork over self-preservation.  Noble, but misguided.  They both were captured and the upperclass cadets had fun blindfolding them, taking them to an empty apartment, and binding them.

Cadet Jenny had her legs tied apart by a senior cadet who unnerved her by touching her bare thighs.  The cadets who tied Cadet Katie were more focused on making her bondage extra tight, allowing no movement and less chance for escape.

After an hour, with a passing grade on the line, the senior cadets relented and pushed their chairs back to back.  Now would be an excellent time for that teamwork, Cadet Katie.